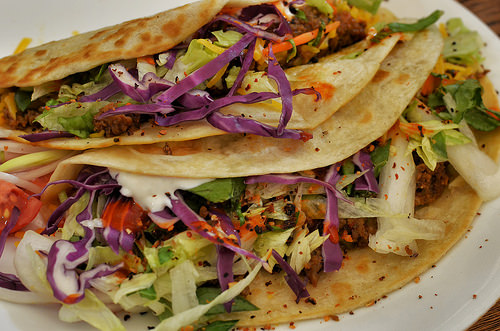 The farm-to-table movement in American restaurants has placed an emphasis on getting locally-sourced, seasonal, and freshly grown produce into the hands of chefs as quickly as possible. Chaia, the new restaurant on Grace Street in Georgetown has built on that concept, offering what they call a “farm-to-taco” experience to area diners.

Friends and owners Suzanne Simon and Bettina Stern have built a following over the last few years at local farmers’ markets with their inventive array of vegetarian, vegan and gluten-free tacos, and took the next stop in opening a brick and mortar location in 2016. While the menu is entirely vegetarian, you’ll find many avowed carnivores singing the praises of Chaia’s tacos, too. Yelpers particularly love the creamy kale and potato tacos, while the mushroom tacos with feta also garner plenty of positive reviews. Pair either with a fresh pressed juice, cold brew coffee, or craft beer, and see for yourself what the neighborhood’s buzzing about.